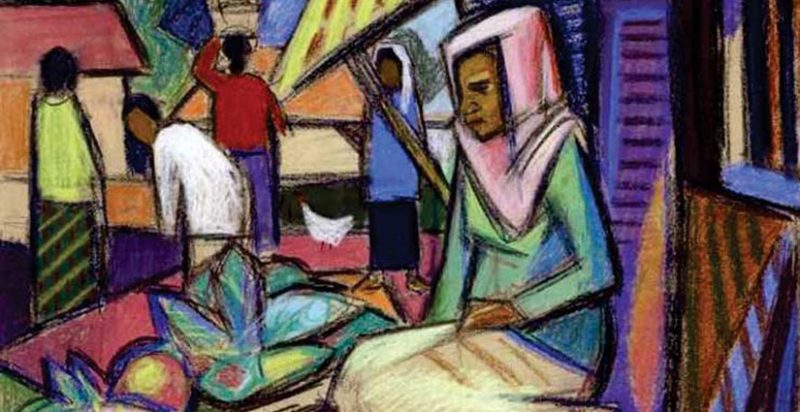 The essence of art is a means to express expression or taste in a medium. The media in question can have a broad meaning, such as music, dance, theater, fine arts and others. In fact, you can also pour art just by making the expression on a plain shirt, front and back, a little more colorful.

Talking about fine art, it turns out that there are not a few names of Indonesian artists who are able to bewitch many people, even to all corners of the world through their paintings.

Of course, the path that these maestros took was not easy. Ups and downs, drops of sweat, tears, and disappointment adorn their days to the point that their struggles are rewarded with the coronation of “Legend” by many because of their unquestionable beauty.

Here are some biographies of famous Indonesian painters

Basically, every painter has their own characteristics and features and that is what makes them different. By continuing to hone their skills, some of them were able to beat international painters at the exhibition. Want to know who these maestros are? Let’s see!

Abdullah Suriosubroto was born in the city of Semarang, precisely in 1878. Abdullah is the adopted son of Dr. Wahidin Sudirohusodo who is a figure in the Indonesian National Movement. He is known. He was known as the first male Indonesian painter of the 20th century.

At first, Abdullah followed in the footsteps of his adoptive father to enter a medical school in Jakarta. After graduating from Jakarta he continued his studies in the Netherlands. After settling there, for some reason Abdullah suddenly turned his back on painting and entered the fine arts school.

Upon his return to Indonesia, Abdullah consistently pursued his profession as a painter. He is very fond of landscapes, which he often pours into his paintings.

The decisions he made when he was young were not in vain, thanks to the work he produced he was included in the genre dubbed “Mooi Indie” or Indies Indah.

Abdullah Suriosubroto is often talked about through his oil painting works as a result of seeing nature from a distance and is romantic.

One of the most famous Indonesian painters, he spent most of his time in Bandung to be close to the natural scenery, before finally moving to Yogyakarta and died in 1941. 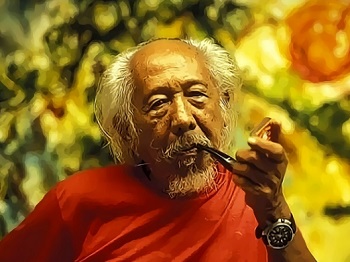 Among the maestros and legends of famous Indonesian painters, maybe Affandi is the one who uses the strangest painting technique. He paints without a brush.

The initial process, he did was to spill colored paints onto the canvas, if seen, it might give a messy impression. But after that Affandi will brush the paint colors with his finger until the finishing stage with charming results.

Affandi is regarded as the most famous Indonesian painter in the world, thanks to his expressionist style and distinctive romanticism. In the 1950s he held many solo exhibitions in the United States, United Kingdom, India and Europe.

He is also known as a simple and humble person. Once upon a time, a painting critic from the West asked what the schools of his paintings were. Unexpectedly he even asked back and asked the Western critic to explain about the schools that exist in the painting.

However, many people considered him a genius. Because during his lifetime Affandi has produced more than 2000 works.

Read Again: 5 Most Expensive Paintings in the World, One of them is Leonardo da Vinci’s Painting 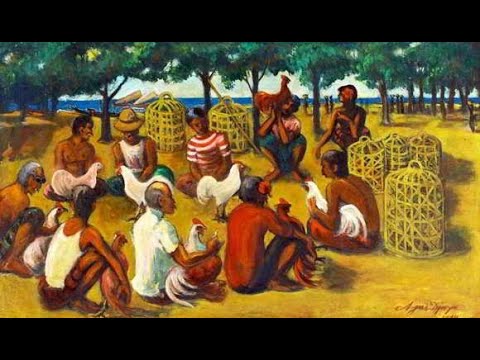 This famous Indonesian painter was born to a Banten noble family on April 1, 1913 with the real name Raden Agus Djaja Suminta.

With this background, it’s no wonder he got a good education. After completing his education in Indonesia, Agus Djaja continued his studies at the Rijks Academy (Academy of Fine Art) in Amsterdam, Netherlands.

While in Europe, he got acquainted with some of the world’s great artists, including Pablo Picasso, Salvador Dali including Ossip Zadkine, a famous Polish sculptor.

Upon his return to Indonesia, Agus Djaja founded Persagi (Association of Indonesian Drawing Experts) and led it from 1938-1942 which was the first organization of fine artists in Indonesia. Therefore, Agus Djaja is declared one of the forerunners of Indonesian painting.

After that, he was recommended by Bung Karno to be the Chairman of the Cultural Center for the Arts Section in 1942-1945.

Apart from being a painter, during the independence revolution, Agus Djaja was active as an Intel Colonel and F.P (field preparation). He was absent from holding a solo exhibition for almost 40 years because of the role and condition of the nation at that time.

After the revolution was over, in April 1976 he held a solo exhibition at Taman Ismail Marzuki, Jakarta. More than 70 paintings are on display. Agus Djaja has characteristics with blue and red colors that seem to give a magical feel. He also often pours puppet objects into each of his works.

After a long time in the capital, Agus Djaja finally decided to move to Bali. There he founded a dream gallery on the shores of Kuta. 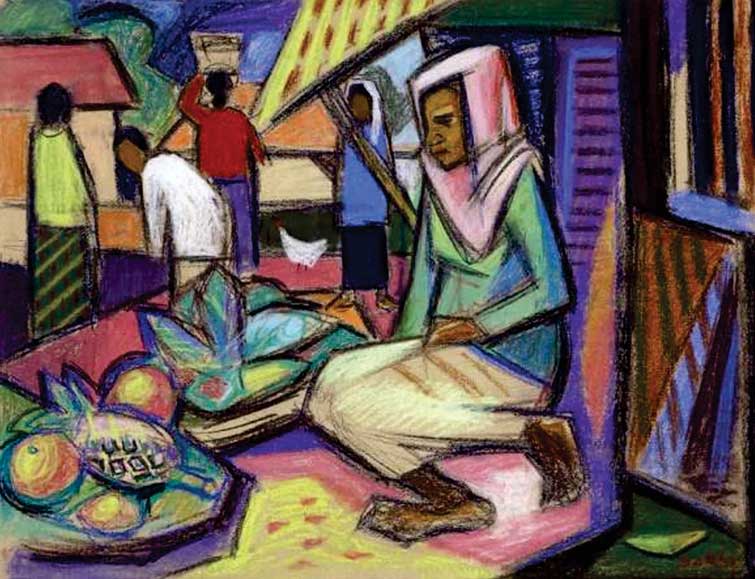 Barli Sasmitawinata is a proud Indonesian realist painting maestro. He was born in Bandung on March 18, 1921, and died in Bandung on February 8, 2007.

Barli began working in the world of painting in 1935 when his brother-in-law asked him to study painting at the studio of Jos Pluimentz, a Belgian painter who had lived in Bandung.

Not satisfied with getting knowledge from Jos Pluimentz, he then studied with Luigi Nobili, an Italian painter. In this studio, Barli began to get acquainted with Affandi.

This acquaintance did not become a thing of the past. Together with Affandi, Hendra Gunawan, Soedarso and Wahdi Sumanta. Barli Sasmitawinata founded the “Five Bandung group”. This group makes their relationship like brothers. If there is a painting event, they are always together.

The great thing is that Barli Sasmitawinata is still thirsty for knowledge, even though he already has name fame. In 1950, he continued his education at the Academie de la Grande Chaumiere Paris, France. Followed at Rijksakademie van beeldende kunsten, Amsterdam, Netherlands in 1956.

Barli is also known as a famous Indonesian painter who emphasizes art education, for that after returning from the Netherlands he founded Rangga Gempol in Dago, Bandung in 1958.

In order to appreciate his long career in painting, the government through the president gave the Satyalancana award to Barli Sasmitawinata in 2000.

Basuki Abdullah was born on January 25, 1915 and died on November 5, 1993, is one of the world’s most famous portrait painters from Surakarta – Indonesia.

This famous Indonesian painter, who is a realist and naturalist, was appointed as a painter at the Royal Palace of Thailand in the 1960s and an official painter at the Merdeka Palace in 1974.

More than that, his obsession with pursuing similarity in face and shape has made Basuki Abdullah liked by the upper class. Various statesmen and their wives competed to ask him to paint them, such as Bung Karno, Prince Philip from England, Prince Bernard from the Netherlands, and the Sultan of Brunei to jet setters such as Mrs. Ratna Sari Dewi.

Basuki Abdullah’s talent for painting was inherited from his father’s artistic spirit, Abdullah Suriosubroto, who is also a painter.

Basuki Abdullah started his education at HIS Catholic and Mulo Catholic Solo, Central Java. Then he received a scholarship in 1933 to study at the Academie Voor Beeldende Kunsten Den Haag, the Netherlands.

He is also one of the Indonesian painters who made the nation proud, because on September 6, 1948, during the coronation of Queen Yuliana in the Netherlands, Basuki managed to beat 87 painters of international caliber in a competition held in Amsterdam.

Apart from Indonesia, he often holds solo exhibitions abroad, such as in Thailand, Malaysia, Japan, the Netherlands, England, and other countries. In fact, no less than 22 countries in the world collect his works.