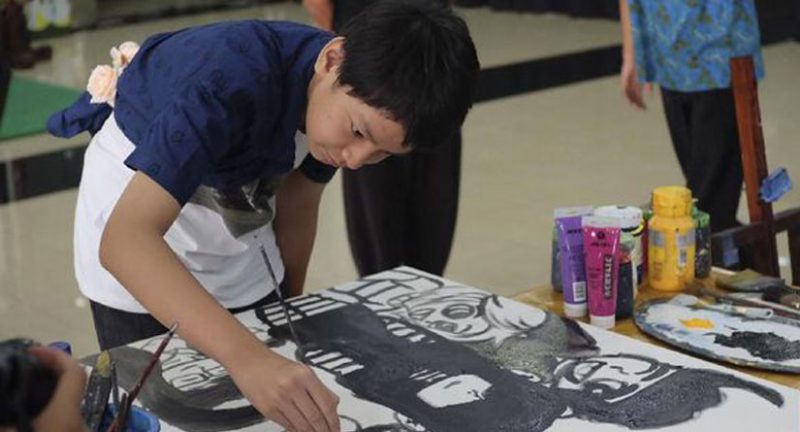 The limitations possessed by people with mental disabilities do not necessarily become obstacles to their artistic creativity. Art, in their case, can be a medium of psychiatric therapy in addition to being a medium of expression.

“Previously, they had to be distinguished from those who truly had talent from those who had no talent but had the energy to channel their frustrations,” said Nova Riyanti Yusuf, as a psychiatrist in the ‘Pioneering Indonesian Brut Art Network’ discussion.

Nova said that painting for people with mental disabilities or psychiatric problems could be an opportunity to express emotions moreover if those with limited psychic abilities are unwilling or able to express it directly.

Children or people with mental disabilities have limited psychological and social functions. However, the causes and implications of these deficiencies cannot be explained.

Some that are classified as mental disabilities are difficult to control emotions and social and mental retardation or with a weak brain capture. Schizophrenia or disruption of thought processes and emotional responses also include mental disabilities.

“Doctors do not necessarily understand how he feels, because sometimes to hurry home and do not need to check again, they will say they have not heard a disturbing where, for example. So what can be done (as distribution) is by painting,” Nova said.

According to Nova, interestingly, not only as a medium of expression, the artwork of people with mental disabilities has a value that is not inferior to those with conditions in general.

“I agree that the work of the disabled is eagerly awaited because it is not just a matter of work, but there is a statement in it,” Nova said.

“Work is not something strange; even writing people is now easy. But what is different, people with disabilities give a sense of their work. Besides talent, there is a deep sense of things that they cannot express,” she said.

Another positive value from issuing expressions through art was expressed by the companion of persons with disabilities at the Hadiprana Art Center, Timotheus Warsito. According to her, painting can help her students be more focused and train the motor system.

Her job is to see the recommended artistic talents of each child and then help direct and explore these talents as a potential and one of the psychiatric therapies.

“(Painting) is very effective to help focus training, motor training is also more subtle and also from the communication that conveyed their ideas into better paintings,” said Timothius, who claimed to have taught hundreds of children.